Another material process I’ve been working with is millefiori canes.  These canes can then be sliced up to become small elements of larger patterns.  It’s a process traditionally used in glass working, but more recently it has become very popular in polymer clay.  The word millefiori is a combination of Italian words which translate to a thousand flowers. 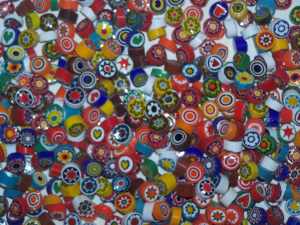 My inspiration for using canes came from the work of Karin Noyes.  I stumbled into her booth at a craft show I was working at and was entranced by the complex patterns she combines to create her work.  She makes bowls and small jewelry pieces by combining slices of these canes together, creating another layer of patterning.

A polymer clay bowl made by Karin Noyes

I began my explorations by experimenting with polymer clay.  I first attempted to make a specific pattern, which proved to be harder than I imagined.  The process of reducing the cane (making it both longer and thinner) distorted the pattern in a way that I wasn’t envisioning when I started.  Although the pattern isn’t as crisp as I was picturing, the repetition of the cane slices produced an interested effect.

After this exploration I decided to make some canes that weren’t referencing quilting patterns just to see what kind of patterns I could achieve, and to practice the reducing portion of the process.  During this exploration I learned that round canes are significantly easier to reduce that other shapes.  Reducing round canes can be easily achieved by simply rolling the canes the same way you would roll out a coil, while other shapes need to be squeezed and compressed more carefully.

I ended up with this variety of canes that I was happy with in this phase of exploration:

Although I was quite happy with these canes, my goal of course was not to produce polymer canes but to translate the canes into clay to be fired to cone 6.  I planed to lay the slices of clay out and pour slip over the back of them to hold them together, so the clay I used reflects that.  I mixed up small portions of a plastic version of the slip I’m using and mixed in mason stains to make the different colors.  The problem I ran into was that this plastic version actually isn’t very plastic at all, and that made it really hard to work with.  During midterm critiques I received suggestions of additions to the clay to make it easier to work with, which would be my next step.  The regular clay doesn’t stick to itself quite the same way that the polymer clay does, so that distorted the jellyroll canes a bit too, but I think working with a more plastic version of the clay could help with this issue as well.

These are the simple cane slices I’ve managed to get with this not-so-plastic clay so far:

Regular clay doesn’t stick to itself quite the same way that the polymer clay does, so that distorted the jellyroll canes a bit too, but I think working with a more plastic version of the clay could help with this issue as well.